Land of the Infidel
Robert Shea

Manual of Psychomagic: The Practice of Shamanic Psychotherapy
Alejandro Jodorowsky

Catch Me If You Can: The True Story Of A Real Fake
Stan Redding, Frank W. Abagnale 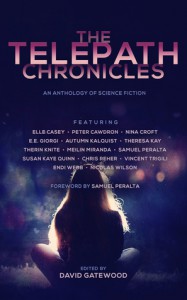 #DontTell (Peter Cawdron)
For centuries, people have wondered what it would be like to read someone’s mind. Little do they know, they already have. To see the anguish on someone’s face, to watch tears fall, or hear their cries and empathize with them—this is the essence of mind reading. In the 21st century, our natural ability to empathize with others has finally evolved into true telepathy, but it’s an evolutionary change that threatens the status quo. The world, it seems, isn’t ready for true mind readers.
The Elm Tree (E.E. Giorgi)
When sixteen-year-old Lily Andrews takes her life, one of the darkest secrets of the small town of Mariposa Springs is buried with her. Three months later, baffled by an inconclusive investigation, County Sheriff Albert Contardo turns to the only person who can help him uncover the secret: the doctor who held Lily’s heart while she died.
Stability (Theresa Kay)
Cora has spent most of her life in a clandestine medical facility, isolated from the world and content to submit to tests and experiments at the request of her keepers. Content, that is, until the day she discovers their end goal: breeding her to create a more stable telepath. So when an attack on the facility gives Cora her chance at escape, she seizes it. But as she gets closer to freedom and learns more about the world outside, Cora finds she doesn’t know whether she’d rather be outside or in—or whom she can trust.
Dreampath (Elle Casey)
Chronically fatigued Kelli Erickson takes her naps very seriously, and when she dreams, she dreams big. Flying without wings? Breathing underwater? Yeah, baby. All that and more. But when a stranger’s voice shows up in her head telling her she needs to Save the girl, things get a little crazier than normal.
Tortured (Nicolas Wilson)
When Vipisana “Sam” Samatha sought refuge on the Nexus, she knew the decision would cause turmoil. But she didn’t expect that Pete, effectively the Nexus’s second-in-command, would feel so threatened by her telepathic abilities that he would stoop to torture in order to understand them. Now, as both Sam and Pete deal with the repercussions of Pete’s decision, Pete finds himself having nightmares—nightmares from which he awakes to find himself being throttled by his own two hands. He thinks Sam is somehow inside his head, trying to kill him—and Sam’s not so sure he’s wrong.
The Locksmith (Susan Kaye Quinn)
In a world filled with mindreaders, Zeph is a mindjacker who wants to stay hidden—even if it means the cute mindreader in his Latin class is forever out of his reach. He locks and unlocks minds for a ruthless mindjacker Clan in exchange for protection and the chance to have a normal life with his parents and little sister. But when a girl he doesn’t know reveals the existence of mindjackers to the world, Zeph is forced to make a choice: unlock—and ultimately destroy—the mind of a young jacker changeling… or turn his back on everyone he loves.
Trauma Room (Samuel Peralta)
In the trauma room, a man lies on a gurney, fragments of an assassin’s bullet in his skull. He carries a secret that could save millions of lives. And if he dies, that secret dies with him.
Venus in Red (Therin Knite)
Grayson Dynamics, led by the illustrious Mick Grayson, is the most powerful technology firm in the world. But underneath the fame and fortune exists a dark and dirty history. Corruption. Lies. Betrayal. Now, a woman with a grudge intends to wipe clean that filthy slate—by killing the CEO who wronged her years ago and ending the global coup he’s been planning for years. And how will she accomplish this? With her newly acquired neural enhancements, of course. Complete with the power to manipulate the minds of others.
Decode (Autumn Kalquist)
Disease ravages humanity, killing millions across the globe. Haunted by the loss of her son to the deadly illness, geneticist Avia Sherman must find the strength to keep going. To find a cure. To save the last remnants of mankind… before the world plunges into desolation.
The Null (Vincent Trigili)
He had left that life behind, sworn he would never return to it. He had a new life—a wife, a daughter. He was happy. But in a wretched twist of events, he finds himself forced to reclaim what he once was in order to save those who are most precious to him. Or else…
Green Gifts (Endi Webb)
Of all the worlds settled by humanity at the end of the Robot Wars, Belen held the biggest secret: native life. For centuries the colonists have protected her secret from the Empire’s grasp, sealing her, quite literally, to their skin. But over time, things change; people, and planets, adapt. Slowly, tentatively, these changes become felt by only a few. A lonely child. A dying grandfather. A troubled biologist. Each lives upon and loves Belen. And apparently she loves them back.
Little Blue (Chris Reher)
All is right with the world when five-year-old Cyann visits her doctors about that odd synaptic anomaly. Nothing to worry about, they said. The voice in her head is just an imaginary friend for the daughter of two busy career officers. But even they cannot protect her when the rebel wars deliver devastation right to their door.
No More Lies (Nina Croft)
Kaitlin grew up as part of a covert operations group, using her particular talents for what she has always believed to be the greater good. They promised her a world with no more lies. A better world. But when her twin brother disappears, Kaitlin must decide where her loyalties lie.
Word-Bound (MeiLin Miranda)
Four-year-old Campbell and his parents are word-bound, among the few who cannot hear or communicate via thought. Implant surgery might end Campbell’s disability—but it might also end his family.
Tweet